Tech Tuesday: How To Optimise Your CSS and Javascript For Fast Front-end Performance


Web performance is important because it affects how enjoyable your website is to use. ‘Performance’ refers to the speed at which web pages are downloaded and displayed on the user’s web browser. It is also now a very strong SEO ranking signal and there is strong evidence that it can dramatically affect ecommerce conversions. As described on this Kissmetric blog, an experiment by Marissa Mayer when she was a Google VP, delaying pageload time by 0.5s reduced traffic by 20%.

Whereas it used to be about factors like network, server response time and CPU usage, the advent of cloud services and broadband fibre have brought it to the front-end. Because as well as managing the objective indicators of speed, we also need to manage the perception of speed.

Starting with objective measures, there are 2 key tactics that need to be employed to achieve better performance on the web and they are:

The average web page is now around 2MB which if you went back to the 1980s, is the amount of memory taken up by a copy of the ground-breaking video game, Doom. As the pipe (bandwidth) grows, we tend to fill it up by sending more through it. The current BBC homepage which is a 1.2MB download. There’s no real difference in downloading time for bbc.co.uk on fibre nowadays versus on 56k dial up a few years ago when it would have been a lot of text amounting to no more than a few tens of KB.

If you aren’t YouTube, the primary consumer of bandwidth on your website will be images. To see this in action, compare the AND Digital homepage which at 2.1MB is nearly 5x smaller than the 11.1MB behemoth that is our Club Ada page which has a photo each for all 80 of us.

There are several things you can do to limit their size:

Outside of images, serve all files that don’t have native compression using HTTP compression. This includes files such as:

It may not seem like it would make a big difference but compressing all of the HTML, JS and CSS needed for the AND Digital homepage means the user only has to download 300KB instead of 1.2MB which could easily be the difference between a bounce and a conversion especially on a shaky mobile network.

With bandwidth being less of a factor – especially on the desktop – latency has become more important. Browsers spend a lot of time waiting for responses to their requests e.g. the delay from the West to the East coast of the US is 80ms (light in fibre is 66% of the speed of light) and this adds up serially as you increase the number of files i.e. ten 10kB requests will always be slower to download than one 100kB request. Bigger files also have more redundant data and are more compressible as a result. There are several ways to reduce request count including:

Set expiration limits on browser cache requests and use conditional GET so the browser doesn’t have to wait for a 304 – not modified server response to find out if a new file needs to be downloaded. 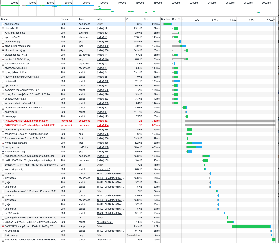 A lot of these problems will be solved when HTTP 2.0 goes mainstream because of 2 key features:

Once you’ve tackled objective measures of performance, you need to tackle perception of speed or how quick your app ‘feels’ to a user. In his 1993 book ‘Usability engineering’, Jakob Nielssen describes 3 speed the user perceives:

There are 3 simple things you can do to make your site feel faster without drastic re-engineering.

For more of these, this Treehouse blog has comprehensive advice on areas where you can find improvements.

A disciplined approach to managing performance

While the transition from HTTP 1.1 is underway, there are several habits which will help you stay on top of performance, namely:

Overall, poor performance is software not behaving as intended so the reasons behind this should be treated like any other bug i.e. test early, test often and triage so you know which bug to work on next. It shouldn’t be the last thing on the checklist before releasing to production; it should be baked into your development process.

Find out more about web performance in this great 60-minute YouTube video “Optimizing front end web performance like a rockstar” by Billy Hoffman. And for more on perceived performance, check out this highly-rated talk from Spotify’s Tobias Ahlin on animation.